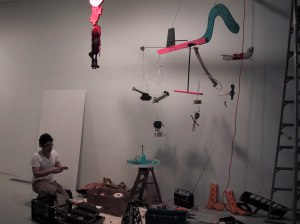 This shot was taken during installation of a piece at the MF in December of 2002.  I didn’t have any gray hair then.  It was right before the war in Iraq began.  I was dealing with issues concerning the media spin on the impending war.  What a disaster!

Commentary: WHATEVER IT TAKES at CMU Miller Gallery

While I was at grad school, one of the most refreshing aspects of being away was the relief from Steelers Mania.  People in other cities actually have better things to do than to be emotionally wrapped up in football for months on end.  Sure, there are tons of football fanatics in New York, but their lives don’t revolve around the game.  Games, for them, are momentary getaways from the bustle of life.  They are not the axes of all human activity.

Bizarre Steelers displays and Steelers fashion is everywhere in Pittsburgh.  You can’t avoid it.  When I found out that it had invaded the Miller Gallery at CMU, I felt like a football fan on the Monday after a big loss.  For the most part, I’m really interested in art that strays far from the usual gallery experience.  I’m not sure if I can call the CMU project art, but I decided to give it a chance.

If you are visiting the gallery to catch a glimpse of the weird obsessions and rituals of Pittsburgh fans, then you will get a healthy dose.  A stadium model built around an old vibrating electronic football game brought back childhood memories.  (It’s mind-boggling to think of the gaming evolution from the buzzing electronic football to today’s life-like video games.  What will fans be playing in ten years?)  A plethora of Steelers tattoos offer flesh and blood proof of fanaticism.  A shrine-like memorabilia room highlights the cult-like practices of extreme followers.

The conceptual thread that ties the show together is the view of Steelers Nation as a sociological force, a union of fans that stretches to the far reaches of the earth.  Wall size charts document the proliferation of Steelers bars throughout the world.  In CMU high-tech style, a live video feed connects the gallery to a Steelers bar in Rome, Italy.  I looked into the camera, and several male bar patrons appeared disappointed.  I think they were hoping to chat with a female visitor.

The most engaging part of the show for me is the Immaculate Reception re-enactment piece.  A gallery attendant coached me on the play.  I ran through the gallery and caught a ball that he tossed.  My play was recorded on video and will be spliced into the actual television footage of Franco’s famous play.  Why, I’m not sure.

Overall, the experience was an amusing one.  I gave it low marks for art value, but credit for bringing the greater community in. Aside from their MFA exhibitions, The Miller hasn’t engaged the community this much since perhaps the Comic Release show of 2003.