Talking About the Weather

Installation shot, Talking About the Weather, 2005, image by Larry Rippel

In 2005, The Three Rivers Arts Festival had a visual arts curator who crafted the festival’s annual show and selected artists from around the country for large-scale projects.  The annual show was held at the galleries at 937 Liberty Avenue, a beautiful space that had been purchased and renovated (and then sadly lost) by the Associated Artist of Pittsburgh.  I was excited to be invited, by curator Katherine Talkcott, to create a storefront installation for the festival in the first floor space.  Previous Arts Festival exhibitions were held in outdoor temporary pavilions and had reminded me of school exhibitions at shopping malls.  The move to the gallery space gave the show a professional look. 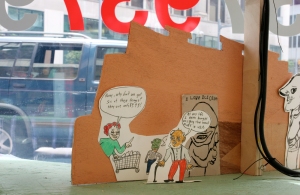 I came across these installation images today and thought about how the world has changed over the past nine years.  To create Talking About the Weather, I walked around Downtown Pittsburgh listening for conversation.  I overheard conversations of all types.  I chatted with people at bus stops, street corners and crosswalks.  Business people were on their phones during the day.  Late at night, a wild and sometimes unsavory crowd roamed the shadowy sidewalks.  I often encountered these characters, as I had obtained keys to enter the gallery and work at night.

After recording bits of conversation in my sketchbook, I would then create a cartoon, doodle or puppet character of the person (with speech bubble) to add to the installation in the gallery.  The installation consisted of a wooden framework, with moving parts to mimic the movement of the city.  As I added more and more characters, people began gathering to see the growing installation.

Since I made this piece, I don’t encounter people (especially strangers) talking in public places as much.  People who are waiting alone immediately pull out their portable electronics.  Small talk, an art in itself, is becoming a thing of the past. 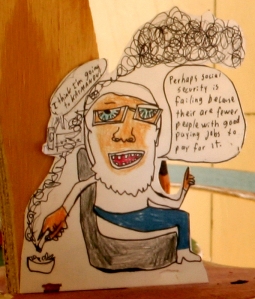 “If I ever get out of here, I’m going to Kathmandu!”